XFactor Tackle doing damage on
the Wallace River in Washington

XFactor Tackle Egg Clusters
Tearing it up on the Kenai in Alaska! 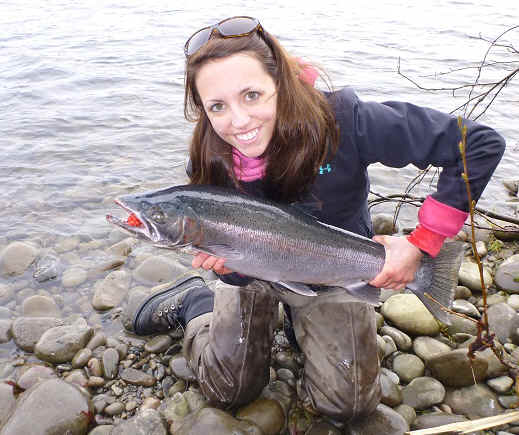 I'm generally not one to choose imitation bait over real bait but this was by far the best "fake" egg I have seen. Unlike most rubber eggs, they come in a pre-molded cluster in several different sizes.

When analyzing all the sizes and colors, my first thought was, "all of these are the most perfect cluster of steelhead bait I have ever seen."

I couldn't get my eggs to form a more perfect cluster on my hook let alone last longer than a couple drifts with our high winter water.

My first technique on any river, any species, is to simply do what I know works first. I tried a few different methods that morning and after hooking 2 nice winter runs the bite died and I decided it was time to put this imitation bait to the test. Can they turn the bite back on? The answer, absolutely! First pass through drifting the red, large size egg cluster and fish on! I knew that I liked the way they looked and how they floated ever so slightly, but I didn't expect anything first pass after over an hour of dead fishing.

I have experimented with a few different ways to use these eggs, and my favorite was definitely drifting them. While they look great under a float, they are the perfect size to drift. I tied a small peice of pink, scented yarn just above the hook and slipped the egg cluster ON my bait loop. These eggs are quite tough and solid so there is no need to slip the bait loop around the eggs; They hold on the hook shank the entire time. In fact, even after fighting the fish, the eggs were still resting perfectly, ready for round two, on the hook. Drifting these eggs are an amazing alternative to real eggs especially in fast, strong water where your real bait just won't hold up several drifts.

They are definitely a "do what works" method for me going forward!

Here's what some other happy customers are saying about XFactor Tackle: