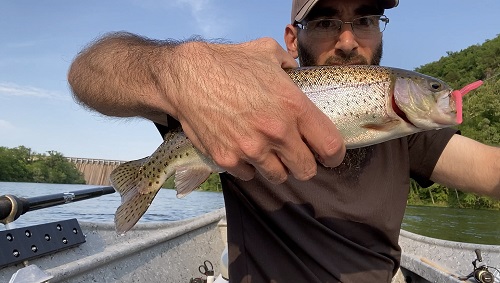 As soon as I saw what the conditions were I immediately motored upstream, positioned my boat perfectly and started drifting down. Not long after my first cast....BAM! Fish on!
It was a good one too
(the pic above was the last one of the day)
This wasn't just a fluke, however. I knew where the fish was and what he wanted because I spotted a pattern.
I was only able to get out for about 45 minutes and in that time I caught 3 beautiful rainbow trout.
The bite was clearly 'ON'!

The best part was that I was able to catch all of these fish one after the other.

What was interesting, however, is that the boats around me weren't doing very well.

One boat with 2 older guys in it seemed really agitated for some reason.

They were so agitated that when I waved at them as I motored back up river they just looked at me with an angry stare...weird!

While I'd love to say that it was because I was using our Miracle Worms and they were tossing spoons, there's more to this story than that.

I had another MASSIVE advantage that they didn't have....

This is something that you can do as well and it won't cost you a dime.

You see, these curmudgeons were not only stuck in a rut (tossing spoons over and over when the fish clearly didn't want spoons), they also didn't realize the situation that they were in.

So how did I get it right and they all got it soooo very wrong?

Not only did I pay attention to water flow, time of day and weather, I also knew based on those parameters, EXACTLY where the fish were!

You see, I've spent YEARS studying and taking notes (sometimes just mental) to figure out where to cast and why, rather than just "tossing it out there" and hoping for the best (like the curmudgeons were doing).

There was a pattern playing out right before our eyes!

There are a couple of things that I do to help me spot these patterns right away.
Water height, based on 'markers'
Even without actual water flow data, you should have some 'markers' that you can pick up on:
A sunken log, for instance.
Is it submerged? Is it exposed? If so, by how much?
How about giant rocks. Are there any giant rocks near your favorite spot?
You can do the same with unique shaped bushes, overhanging trees, etc.
Pick one or several of the 'markers' mentioned above and study them every time out.
Figure out what condition these 'markers' are in and how the fishing was in relation to it. Even if you have a good memory, consider writing this info down.
If you have access to USGS water flow data in CFS, by all means grab it and write it down so you can apply cfs to the 'markers' just mentioned.
Location: finding the spot within the spot!
There's a stretch of river that I've learned REALLY well over the last 4 years. What I do is break that stretch up in 4 pieces:
These spots all fish differently depending upon water flow.
I knew the river was at or near 14,000 cfs because of the 'markers' mentioned above. All of the logs were totally underwater and the edge of the river was all the way to the base of the weird bushes!
That leads to my next point:
Where did they bite?
Pay attention to WHERE your bait was when a fish bites. Where did you cast? How far down did it drift before you got a bite?
Last year I really honed in on this water flow (13,000 - 14,000 cfs) because I had so many epic days on the river under these conditions and I really wanted to make sure that I could duplicate that success the next time I spotted it.
I made notes using all of the indicators mentioned above and paid very close attention every time I got a bite so I knew EXACTLY where the fish were holding.
Keep in mind that these are resident trout, not migratory Salmon or Steelhead, so these patterns will pretty much stay the same unless there's a massive flood and the holding water changes due to logs, rocks, etc. shifting position.
You can still apply this to salmon or steelhead fishing it'll just be seasonal data because those species typically aren't in the river 365 days a year.
Anyway, back on track....
Using these indicators, I was able to position my boat and make a perfect cast to the exact spot that fish hold under these conditions.
The results were fantastic, as mentioned above.
What bait was used?
Last year under the conditions mentioned above I was fishing a 3" Shrimp Pink Miracle Worm with unbelievable success. Last week, under the same conditions, I rigged up the same exact bait and put it in the same exact spot to get the same amount of success!
There's one other thing that I make sure to day, typically for trophy fish...
Name the pic
Instead of naming a picture on my computer as: beautiful-steelhead.jpg, I'll instead name it after the day it was caught and what it was, like this:
Sometimes, on really memorable fish, I'll name the fish too, like this: battle-axe-5-14-20
So, let's sum it up so that you can go out and have repeatable success on the river too:
Hopefully this article will help you have more success on the water. Our goal is to have XFactor Tackle customers not just fish our baits but to take these tips and out fish everyone else with them. Just be nice about it =)
If this article was helpful please comment below and consider sharing it with a friend!
God Bless and Fish On!
Jeff Warner
XFactor Tackle
PS: Keep your eyes on your inbox and on this blog.....we have a lot more articles and videos coming out every week (sometimes daily)
Previous Post
Next Post

Stephen Hynes
Reply
Congratulations on your fishing success. Success in fishing is often being observant and adapting methods based on those observations. Many fishermen will stubbornly stick with one method because it it worked for them last week, month, year. Always worms on the bottom or dry fly on top and everything in between. I've also been given the " evil eye " by unsuccessful anglers when I've caught a fish or few. If I've skunked out but another angler is having a good day, I'll give them a friendly smile and a thumbs up. Tomorrow it may be the opposite. Anyway, we call it fishing not catching! I bought a few packets of your soft trout beads last year but haven't opened them yet. Fishing last year was severely interrupted by COVID lockdowns here in Victoria, Australia. Tomorrow may be my last session on trout as the streams close in a week or so to let the trout breed. It might be a good time to try the trout beads. I really enjoy reading your blog and watching the very informative videos. Cheers, Steve
Quick View